Hey Cleveland, are you ready for the ultimate Bob Marley Tribute experience?

Bob Marley Tribute 2019, presented by Andy Shaw Band and Columbus Reggae Alliance, takes place this Saturday Feb 2 at Rumba Café (2507 Summit St. Columbus). Doors open at 8 p.m. and the magic begins at 9 p.m. This will be an epic night featuring the best lineup yet! 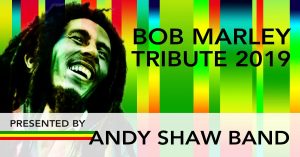 Check out some of the amazing talent that will be in attendance:

Benny Coleman of the The Quasi Kings

Benny Coleman is the lead singer of one of the brightest up and coming reggae rock bands in the region the Quasi Kings. The band has been making some big waves over the last few years, and just released their latest EP Throwaway Culture to a sold-out crowd at Woodlands Tavern. Benny offers a soulful, honest, and well-tuned approach to Bobs music.

Lungu Vybz is a band comprised of family, and touches on the roots of reggae like no other. Don’t let their youth fool you. The band’s sound is well beyond their years, and it’s impossible to not be pulled into their music, spirit, and stage presence. One of the truly up and coming reggae bands in Columbus, they are not to be missed!

ASB is one of Columbus’ hardest working bands. Formed in 2005, the band has gone through many changes, and configurations, always being anchored by Andy and his brother Chris, and father Jim. A true love for reggae, roots, American roots, and rock, the band found inspiration in Bobs music long before hosting these tributes. As the band evolved, began hitting the road, and recording, it was impossible not to be influenced by concepts and ideas created by Marley’s music. Now after many years of the yearly tribute, the band has locked in on a sound and approach that they are eager to share. A true night of togetherness, inspiration, and good vibes, the band performs their tribute for the first ever time at Rumba Cafe.

Tickets are just $10 for this all-ages event and can be purchased online at https://www.ticketweb.com/event/bob-marley-tribute-2019-andy-rumba-cafe-tickets/9001905.

Tess Abney
Tess Abney is a freelance writer who was born and raised in the Quad Cities. She spends most of her time attempting to successfully raise three boys. In her free time, writing is her passion. Whether it is sharing local events and businesses with readers or sharing her thoughts on life, she finds comfort in the way words can bring people together.
Tagged: Andy Shaw BandBenny ColemanBob MarleyColumbusEventsLungu VybzRumba CaféThe Quasi KingsThings To DoTribute