Columbus Funny Bone Comedy Club is the place to be for fun and laughter this weekend!

Rapidly becoming one of the most talked about comedians, Arnez J”s charisma and physical agility are unforgettable. With the physicality of Jim Carey, his brand of comedy has dubbed him “the black Jerry Lewis”. 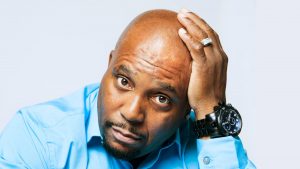 Arnez was recruited by The Harlem Globetrotters after their scouts saw his very physical comedy routine and his local celebrity basketball games. However. Arnez suffered a minor knee injury that forced him to put his basketball career on hold. An Atlanta native, Arnez began working the comedy circuit in Georgia and quickly became one of “Hotlanta”s” funniest newcomers. A finalist in the 1992 Bay Area Black Comedy Competition, Arnez was immediately noticed by the entertainment industry and was asked to make his first television appearance on Showtime”s “Comedy Club Network”. Numerous television appearances soon followed including The Keenan Ivory Wayans Show, Comedy Central, NBC”s “Friday Night Videos”, Russell Simmon”s “Def Comedy Jam”, and his own BET”s “Comicview Grandstand” 1/2 hour comedy special, .Fulfilling one of his dreams to sing and dance on stage, Arnez most recently toured the country with the live stage production of The Maintenance Man . In addition, this past summer, Arnez filmed a movie role in the independent feature Up Against the 8-Ball.

In Keeping with his plan, Arnez keeps up a dizzy pace performing for sold out crowds in clubs, colleges and concert halls across the country!

Tess Abney
Tess Abney is a freelance writer who was born and raised in the Quad Cities. She spends most of her time attempting to successfully raise three boys. In her free time, writing is her passion. Whether it is sharing local events and businesses with readers or sharing her thoughts on life, she finds comfort in the way words can bring people together.
Tagged: Arnez JColumbusComedyEventsFunny BoneThings To Do