Using his experiences growing up in Newark, Bill Bellamy started doing stand-up while he was a student at Rutgers University. Bellamy quickly discovered how much he enjoyed making people laugh and began honing his skills at small comedy clubs around the country and soon was making waves in the New York clubs like The Improv, The Comic Strip, and at The Comedy Store in Los Angeles. 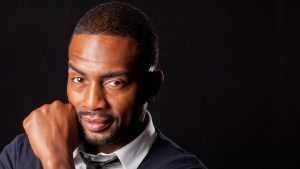 Two short years later, Bellamy had earned a spot on “Def Comedy Jam” where he notoriously coined the phrase “booty call.” The now famous late-night rendezvous moniker became the name for his first comedy special for Showtime; “Booty Call” was instantly one of the network’s top-rated specials. On the heels of the success of that special, in the years following, Bellamy became a staple on MTV as one of the first “VJs” on the network. He hosted several of their programming blocks, including “MTV Jams” and “MTV Beach House.”

Landing his own series, “The Billy Bellamy Show” in 1996, Bellamy continued to star on the big screen in addition to garnering coveted guest roles in several prominent television series. In the feature world, Bellamy starred in LOVE JONES, HOW TO BE A PLAYER, LOVE STINKS,

THE BROTHERS, and ANY GIVEN SUNDAY. At the same time, showcasing his multihyphenate talents, Bellamy continued to hone his comedy and stand-up prowess. Bellamy’s second comedy special, “Crazy Sexy Dirty,” also for Showtime in May 2012.

Bellamy has recently guest-starred on USA’s “White Collar” and appeared on several episodes of Tyler Perry’s “Meet The Browns” on TBS. He also guest-starred on ABC’s “Castle” and USA’s “Royal Pains.” Previously, he hosted four seasons of the TV One comedy competition show “Who’s Got Jokes?” and two seasons of NBC’s “Last Comic Standing.”

Tess Abney
Tess Abney is a freelance writer who was born and raised in the Quad Cities. She spends most of her time attempting to successfully raise three boys. In her free time, writing is her passion. Whether it is sharing local events and businesses with readers or sharing her thoughts on life, she finds comfort in the way words can bring people together.
Tagged: Bill BellamyBooty CallsColumbusColumbus Funny Bone Comedy ClubComedyEventsThings To Do