Comedian Eddie B. brings uncensored, raw, and hysterically realistic portrayal of a teacher’s hectic life with “Teachers Only Comedy Tour” to Columbus!

Teachers Only Comedy Tour will be making at stop at Ohio Theatre (39 E State St. Columbus) this Saturday Sep 29 at 8 p.m. 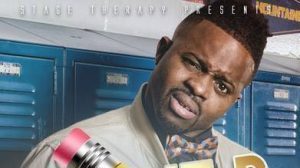 Eddie B., a Houston native is single handedly changing the comedy game, tapping into the minds of teachers around the world and selling out major arenas throughout the country in minutes! While others waited in the wings for a shot at becoming a top standup comic, Eddie soared to new heights by creating his own opportunity with the blockbuster “Teachers Only Comedy Tour”! The “Teachers Only Comedy Tour” has established Eddie as the official voice of teachers across the globe. Educators from America to Africa, Dallas to Dubai, New York to New Delhi (and beyond) are getting a lesson in the funniest ways to express their worst frustrations, and they are loving every second of Eddie B.’s uncensored, raw, and hysterically realistic portrayal of a teacher’s hectic life, from the point of view of an actual teacher!

The phenomenon, which began with a series of videos entitled “What Teachers Really Say” (written, produced, and starring Eddie B.) has tapped into a niche only this multi-faceted comic/teacher can comprehend. Through a rigorous comedic set characterized by original material and accented by physical comedy, Eddie B. says what teachers everywhere are thinking but couldn’t quite say out loud, (until now!). Millions of educators on social media are calling the “Teacher’s Only Comedy Tour” their very own stress reliever and they are filling their favorite venues to capacity eager to hear Eddie B. speak THEIR mind.

Tess Abney
Tess Abney is a freelance writer who was born and raised in the Quad Cities. She spends most of her time attempting to successfully raise three boys. In her free time, writing is her passion. Whether it is sharing local events and businesses with readers or sharing her thoughts on life, she finds comfort in the way words can bring people together.
Tagged: ColumbusComedyEddie BEventsOhio TheatreTeachers Only Comedy TourThings To Do