Dyson is the keynote speaker at the event, which will take place at 10 a.m. Jan 30 at Nestor Hall Auditorium (488 Mt. Vernon Ave. Columbus). Tickets are free with registration. Seating is first-come, first-served; overflow seating will be available if needed. 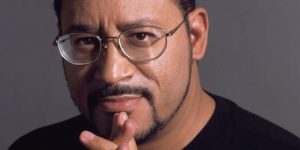 Dyson, professor of sociology at Georgetown University, is an author, a contributing opinion writer at the New York Times, an MSNBC political analyst, a contributing editor at New Republic, and an ordained Baptist minister for more than 30 years. He is the author of nearly 20 books, including most recently “What Truth Sounds Like” and “Tears We Cannot Stop.”

Columbus State has brought in high-visibility speakers for its annual Martin Luther King Jr. Day of Celebration for 30 years. The college honors Dr. King near but not on the MLK Jr. holiday to maximize opportunities for students, faculty and staff participation on a date classes are in session. Past speakers have included Angela Davis, Donna Brazile, the Rev. Al Sharpton, Nikole Hannah-Jones and Dick Gregory.

This is Dyson’s second appearance at Columbus State; he first spoke at the Day of Celebration event in 2012. Columbus State is partnering with The Ohio State University to host the appearance; Dyson will also speak at Ohio State later on Jan. 30.

Dyson’s work as an author has covered subjects such as the legacy of Martin Luther King Jr. in April 4, 1968; Malcolm X; Nas’ debut album “Illmatic;” Tupac; Marvin Gaye; and Hurricane Katrina’s devastating and long-lasting effects. He has won two NAACP Image Awards for Outstanding Literacy Work in Non-Fiction and the American Book Award in 2007 for “Come Hell or High Water: Hurricane Katrina and the Color of Disaster.”

Essence has named Dyson one of the 40 most inspiring African Americans and Ebony has listed him among the 100 most influential black Americans. While he often speaks at universities and political conventions, he is also known for his speaking engagements at union halls, prisons, classrooms and churches.

Dyson will conclude his appearance with a book signing. Copies of “What Truth Sounds Like” will be available for sale.

Get registered today at https://www.eventbrite.com/e/columbus-state-30th-annual-mlk-celebration-with-dr-michael-eric-dyson-tickets-53974173205.

Tess Abney
Tess Abney is a freelance writer who was born and raised in the Quad Cities. She spends most of her time attempting to successfully raise three boys. In her free time, writing is her passion. Whether it is sharing local events and businesses with readers or sharing her thoughts on life, she finds comfort in the way words can bring people together.
Tagged: ColumbusColumbus State Community CollegeEventsMartin Luther King Jr. Day of CelebrationMichael Eric DysonThings To Do