Things are gonna get a little Country in Columbus this week.

Brothers Osborne, along with Ruston Kellky, take the stage at Express LIVE (405 Neil Ave. Columbus) this Wednesday Feb 20 at 7 p.m. 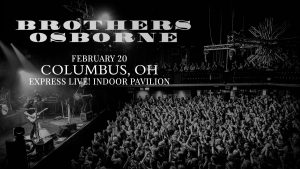 Two sons from a working-class family, John and TJ Osborne grew up in a small, Maryland water town writing and playing songs for friends and family in their father’s shed. John moved to Nashville first to play in other bands and two years later, TJ joined him. It was then they formed Brothers Osborne as a twang-and-crunch duo that blends equal parts country and rock into one of the freshest, most identifiable sounds to come out of Nashville in recent years.

They just released their sophomore album, PORT SAINT JOE, in April and had a recent hit with the single “Shoot Me Straight”. Their new single, “I Don’t Remember Me (Before You)” is currently at radio.

Brothers Osborne has previously toured with Chris Stapleton, Eric Church, Little Big Town, Miranda Lambert and more. This past summer they toured with Dierks Bentley after coming back from a sold out headlining tour in the UK.

Tess Abney
Tess Abney is a freelance writer who was born and raised in the Quad Cities. She spends most of her time attempting to successfully raise three boys. In her free time, writing is her passion. Whether it is sharing local events and businesses with readers or sharing her thoughts on life, she finds comfort in the way words can bring people together.
Tagged: Brothers OsborneCincinnatiEventsRuston KellyTaft TheatreThings To Do