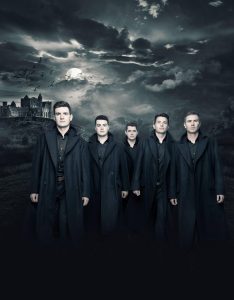 Celtic Thunder is an Irish singing group and stage show known for its eclectic, theatrical style show. The group is backed by the Celtic Thunder Band on their concert tours, and their live shows are known for the use of dramatic set pieces (often invoking symbols of ancient Celtic mythology), visual effects, and highly choreographed staging.

Backed by the amazing Celtic Thunder Band, the singers (Damian McGinty, Ryan Kelly, Michael O’Dwyer, Emmet Cahill & Neil Byrne) deliver new ensemble numbers including “Sons of Light”,”Toora, Loora, Lay”, “The Wild Rover”, “Right all right”, and “Castle on the Hill” followed in the second act by nostalgic fun songs like “Celebration”, “I’m a Believer”, “Seasons in the Sun” and “Rise Again”. No Celtic Thunder show would be complete without an encore of their rousing anthem “Ireland’s Call”, the only song in CELTIC THUNDER X that isn’t a new song, but which never fails to bring the audience to its feet.

Ticket prices vary and can be purchased online at https://www.ticketmaster.com/celtic-thunder-ohio-theatre-columbus-oh/venueartist/41027/755495.

Tess Abney
Tess Abney is a freelance writer who was born and raised in the Quad Cities. She spends most of her time attempting to successfully raise three boys. In her free time, writing is her passion. Whether it is sharing local events and businesses with readers or sharing her thoughts on life, she finds comfort in the way words can bring people together.
Tagged: Celtic ThunderCeltic Thunder BandCeltic Thunder X TourColumbusEventsOhio TheatreThings To Do