The man, the legend, the knight, Sir Elton John is on his final tour. And he’s making a stop in Columbus! 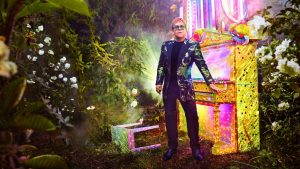 After more than half a century on the road and a career that has redefined the cultural landscape and seen Elton John claim his place as a true global icon, the superstar announced details of his final tour called ‘Farewell Yellow Brick Road’.

Kicking off in the U.S. the ‘Farewell Yellow Brick Road’ tour will consist of more than 300 shows across five continents, hitting North America, Europe, Asia, South America and Australasia before reaching its conclusion in 2021. These dates mark the superstar’s last-ever tour, the end of half a century on the road for one of pop culture’s most enduring performers. Elton’s new stage production will take his fans on a musical and highly visual journey spanning a 50-year career of hits like no one has ever seen before.

Tess Abney
Tess Abney is a freelance writer who was born and raised in the Quad Cities. She spends most of her time attempting to successfully raise three boys. In her free time, writing is her passion. Whether it is sharing local events and businesses with readers or sharing her thoughts on life, she finds comfort in the way words can bring people together.
Tagged: ColumbusElton JohnEventsfarewellFarewell Yellow Brick Roadfinal tourThe SchottThe Schottenstein CenterThings To Do