Travis Scott has announced the second leg of his “ASTROWORLD: WISH YOU WERE HERE” tour, and he is making a stop in Columbus! 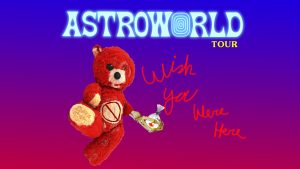 A Houston-born hip-hop artist and producer affiliated with Kanye West’s GOOD Music and T.I.’s Grand Hustle, Travis Scott became known during the early 2010s for his heavily Auto-Tuned half-sung/half-rapped vocal style. Within seven years of his mainstream arrival via West’s Cruel Summer compilation (2012), on which he served as co-producer and featured artist, Scott attained numerous platinum singles as a lead artist, including a streak of four that began with “Antidote,” a single off his number three hit debut album, Rodeo (2015).

ASTROWORLD is Travis Scott’s long-awaited third studio album, following his 2016 release Birds in the Trap Sing McKnight. The album is titled after Six Flags Astroworld, a popular Houston amusement park. The park was demolished in 2005. On December 7th, 2018, the album was nominated for the Grammy’s best rap album of 2018. Additionally, the hit “SICKO MODE” was nominated for both the best rap song and the best rap performance.

Ticket prices vary and can be purchased online at Ticketmaster.com.

Tess Abney
Tess Abney is a freelance writer who was born and raised in the Quad Cities. She spends most of her time attempting to successfully raise three boys. In her free time, writing is her passion. Whether it is sharing local events and businesses with readers or sharing her thoughts on life, she finds comfort in the way words can bring people together.
Tagged: AstroworldColumbusEventsGrammyship-hoprapSheck WesThe Schottenstein CenterThings To DoTravis ScottWish You Were Here