Humorist John Moe and Jen Kirkman Come to You Virtually

Join Thurber House in welcoming humorist John Moe and special guest Jen Kirkman for a literary ZOOM event on Wednesday May 13 from 7 – 8:30 p.m. This event will conclude with a question and answer session and the opportunity to purchase a signed book that will be shipped to you. 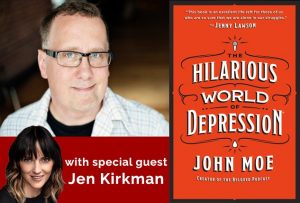 ABOUT THE BOOK AND AUTHOR

John Moe is a critically-acclaimed public radio personality and the host and creator of the award-winning hit podcast, The Hilarious World of Depression. For years, Moe struggled with depression; it plagued his family and claimed the life of his brother in 2007. As Moe came to terms with his own illness, he saw similar patterns of behavior and coping mechanisms in others, including high-profile comedians who’d struggled with the disease.

Inspired by the success of his podcast, Moe has turned The Hilarious World of Depression into a book—part memoir of his own journey, and part treasure trove of laugh-out-loud stories and insights drawn from years of interviews with some of the most brilliant minds. Throughout this powerful narrative, depression’s universal themes come to light: struggles with identity, lack of understanding of the symptoms, the challenges of work-life, self-medicating, and more.

FEATURING A SPECIAL GUEST APPEARANCE: Jen Kirkman is a comedian, NYT-bestselling author, television writer, and actor. She is a WGA award winner for her work on the Amazon Prime series The Marvelous Mrs. Maisel and has written for various sitcoms and late-night shows. Jen has appeared on Lights Out with David Spade, The Late Show with Stephen Colbert, The Tonight Show with Jay Leno, The Late Late Show with Craig Ferguson, and more. >> www.jenkirkman.com

Join us for a VIP pre-event with John Moe from 6:00–6:45 pm EST on Zoom! The VIP pre-event is a great opportunity to meet the author “face to face” and have a discussion in a small group setting. Capacity is limited.

John Moe will discuss his latest book, The Hilarious World of Depression, inspired by his podcast of the same name. Guest Jen Kirkman will make a special appearance. The event will conclude with a question and answer session during which John will take questions from the audience.

Tess Abney
Tess Abney is a freelance writer who was born and raised in the Quad Cities. She spends most of her time attempting to successfully raise three boys. In her free time, writing is her passion. Whether it is sharing local events and businesses with readers or sharing her thoughts on life, she finds comfort in the way words can bring people together.
Tagged: ColumbusJen KirkmanJohn MoeonlineThings To DoThurber Housevirtual