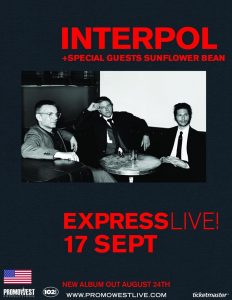 Interpol, who are one of the most critically and commercially acclaimed bands of the last decade and a half, are also one of the hardest working bands on the planet. The dark side of the turn of the century’s post-punk revival, Interpol formed in New York City, USA during the summer of 1997. 16 years since their debut album, 2002’s “Turn On The Bright Lights” their atmospheric and energetic indie rock continues to be a critical and commercial success.

Tickets to this show are $29.50 in advance and $32 on the day of the show. Purchase your tickets today at https://www.ticketmaster.com/interpol-express-live-columbus-oh/venueartist/41554/836507.

Tess Abney
Tess Abney is a freelance writer who was born and raised in the Quad Cities. She spends most of her time attempting to successfully raise three boys. In her free time, writing is her passion. Whether it is sharing local events and businesses with readers or sharing her thoughts on life, she finds comfort in the way words can bring people together.
Tagged: ColumbusEventsExpress LIVEInterpolSunflower BeamThings To Do