Catch Kasey Musgraves and her Oh, What a World: Tour, with opening artist Liza Anne, this Tuesday Jan 29 at Express LIVE. Doors open at 7 p.m. This is an all-ages indoor show!

In support of her critically-acclaimed #1 album Golden Hour, Kacey Musgraves announced the North American dates on her headlining Oh, What A World: Tour, which kicked off on Jan 9. 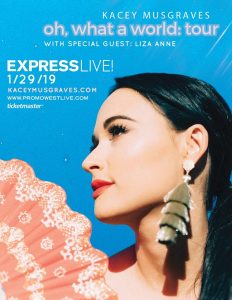 Golden Hour was released earlier this year to massive critical acclaim, with USA Today asserting “Golden Hour may be 2018’s best album yet.” The album has since been praised as one of the “Best Albums of 2018 (So Far)” by nearly every outlet, from NPR, TIME, Rolling Stone, Billboard, Variety and Entertainment Weekly to Consequence of Sound, Complex, Paste, Stereogum, and Marie Claire. Billboard states, “here, Musgraves has created her own musical world where twangy guitars, banjos, violins, and disco beats not only co-exist, they thrive,” Stereogum decrees “on an album that approaches perfection, our favorite tends to be whichever song is playing,” and Consequence of Sound predicts “Golden Hour is not just for 2018, but for the ages.”

Tess Abney
Tess Abney is a freelance writer who was born and raised in the Quad Cities. She spends most of her time attempting to successfully raise three boys. In her free time, writing is her passion. Whether it is sharing local events and businesses with readers or sharing her thoughts on life, she finds comfort in the way words can bring people together.
Tagged: ColumbusEventsExpress LIVEGolden HourKacey MusgravesLiza AnneOh What A WorldThings To Do