The venue may have changed, but the same great performance is still scheduled. 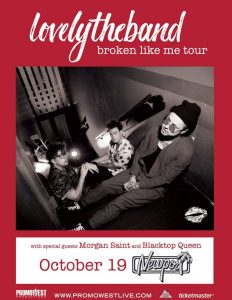 A sleek-toned indie pop band, the Los Angeles trio lovelytheband formed in West Hollywood in late 2016. Led by Mitchy Collins along with guitarist Jordan Greenwald, and drummer Sam Price, the band debuted in July 2017 with “broken,” a sprightly and infectious single that quickly racked up over three million streams on Spotify. Signing with Another Century Records (Sony RED MUSIC), lovelytheband released their debut EP, “everything i could never say…”, in September of that year. Billboard dubbed lovelytheband One of 10 Rock & Alternative Acts to Watch in 2018.

Tess Abney
Tess Abney is a freelance writer who was born and raised in the Quad Cities. She spends most of her time attempting to successfully raise three boys. In her free time, writing is her passion. Whether it is sharing local events and businesses with readers or sharing her thoughts on life, she finds comfort in the way words can bring people together.
Tagged: ColumbusEventsLive MusicLovelythebandNewport Music HallThings To Do