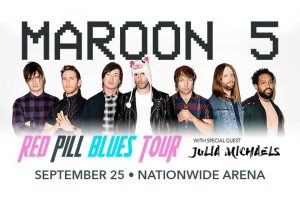 While it’s hard to find a song by Maroon 5 that hasn’t gone to the top of the charts, you will enjoy hits like “What Lovers Do,” “Payphone,” “Sunday Morning,” “Harder to Breathe,” “This Love” and so many more!

Julia Michaels, a Davenport Iowa native, has quite the long list of accomplishments at the age of 24. Michaels began singing at age 12. When she was 14, she met songwriter Joleen Belle, with whom she wrote the theme song to “Austin and Ally” and many other songs for TV and film. At 19, she met Lindy Robbins, with whom she wrote “Fire Starter” for Demi Lovato and “Miss Movin’ On” for Fifth Harmony. Michaels had been writing in the Hollywood Pop Circuits since she was 16. When she was 20, she met her songwriting partner Justin Tranter with whom she frequently collaborates. Together with the Norwegian musician Kygo she performed “Carry Me” at the closing ceremony of the 2016 Summer Olympics in Rio de Janeiro, Brazil. In January 2017, Michaels released her first solo single, “Issues”. At the 2018 Grammy Awards she was nominated for 2 awards, Best New Artist and Song of the Year for “Issues”.

Ticket prices vary and can be purchased online at https://www.ticketmaster.com/maroon-5-nationwide-arena-columbus-oh/venueartist/41498/824144.

It’s not very often you get a chance to catch a live concert from Maroon 5 with such an amazing opening act! Don’t miss this performance!

Tess Abney
Tess Abney is a freelance writer who was born and raised in the Quad Cities. She spends most of her time attempting to successfully raise three boys. In her free time, writing is her passion. Whether it is sharing local events and businesses with readers or sharing her thoughts on life, she finds comfort in the way words can bring people together.
Tagged: ColumbusEventsIssuesJulia MichaelsMaroon 5Nationwide ArenaRed Pill Blues TourThings To Do