Mozart to Matisse: Russian Winter Festival & Art of the Russian at CMA

As part of select Masterworks Series performances, the Columbus Symphony and Columbus Museum of Art will collaborate in a series of afternoon lectures that pair chamber music performances by Symphony musicians with works from the CMA art collection. The presentations will focus on specific periods being presented in the upcoming CSO Masterworks concerts and explore the common themes and aesthetic influences between music and visual art. 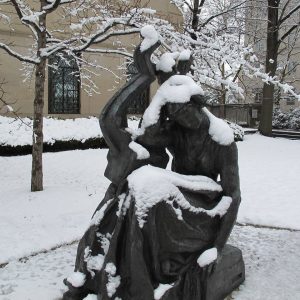 Preceding the performance of 20th-century music by Russian composers, an illustrated talk on Russian poster art of the Second World War will be presented, chronicling the brief period during which Americans were allied with Soviets in their struggle to defeat the Nazis. These rare posters, produced collectively in Russian studios and workshops during the war promoted the anti-German cause with gruesome images of Nazi brutality, ruthless political caricatures, and idealized depictions of heroic workers and soldiers designed to inspire the Soviet citizenry.

For more information and to purchase your tickets today, visit https://www.columbussymphony.com/events/calendar/profile.dT/russian-winter-1.

Tess Abney
Tess Abney is a freelance writer who was born and raised in the Quad Cities. She spends most of her time attempting to successfully raise three boys. In her free time, writing is her passion. Whether it is sharing local events and businesses with readers or sharing her thoughts on life, she finds comfort in the way words can bring people together.
Tagged: Art of the RussianColumbusColumbus Museum of ArtColumbus SymphonyEventsMasterworks SeriesMozart to MatisseRussian Winter FestivalThings To Do