Home › Articles › Local › Nightmares Film Festival is Upon Us

Come together with filmmakers, fans and friends to revel in a four-day, worldwide program at Nightmares Film Festival, considered among the best genre festivals in the world! 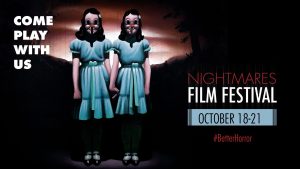 Nightmares Film Festival sets itself apart from other genre fests by its deep year-round connection to the horror filmmaking community, which gives it the first line on the rarest, scariest, most daring and most unsettling films being created around the country.

To purchase tickets and view the scheduled showings, visit https://filmfreeway.com/NightmaresFilmFest.

Tess Abney
Tess Abney is a freelance writer who was born and raised in the Quad Cities. She spends most of her time attempting to successfully raise three boys. In her free time, writing is her passion. Whether it is sharing local events and businesses with readers or sharing her thoughts on life, she finds comfort in the way words can bring people together.
Tagged: ColumbusEventsGateway Film CenterNightmares Film FestivalThings To Do