Home › Articles › Music › Snow Patrol Back in U.S. and Heading to Columbus!

Snow Patrol Back in U.S. and Heading to Columbus!

After a seven-year hiatus, Snow Patrol is back and better than ever! 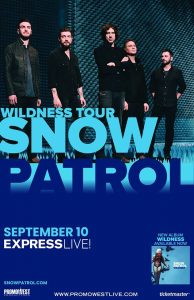 After their Fallen Empires tour ended in 2012, band members —which also include multi-instrumentalist Johnny McDaid, guitarist Nathan Connolly, bassist Paul Wilson, and drummer Jonny Quinn — decided to take a step back from the band and focus on their own projects. Gary Lightbody continued his work with his Tired Pony side project with members of Belle and Sebastian, R.E.M, Reindeer Section and Fresh Young Fellows and moved to Los Angeles to begin writing songs for movies (including “This Is How You Walk On” for 2017’s Gifted), and doing a number of high-profile co-writes with Ed Sheeran, Taylor Swift, Biffy Clyro, and One Direction.

Taking this extended break from Snow Patrol proved to be a source of inspiration and writing songs that were not pulled directly from his own psyche helped heal what Lightbody considered to be not so much writer’s block as life block.

Tess Abney
Tess Abney is a freelance writer who was born and raised in the Quad Cities. She spends most of her time attempting to successfully raise three boys. In her free time, writing is her passion. Whether it is sharing local events and businesses with readers or sharing her thoughts on life, she finds comfort in the way words can bring people together.
Tagged: ColumbusEventsExpress LIVEHarrison StormSnow PatrolThings To Do