Do you love movies? Do you love Columbus? Then this festival was created just for you!

The 7th Annual Film Festival of Columbus will be kicking off on Wednesday Aug 8 at the Gateway Film Center (1550 N High St. Columbus). Due to the high number of submissions this year, the festival will be adding a day and running through Sunday Aug 12! 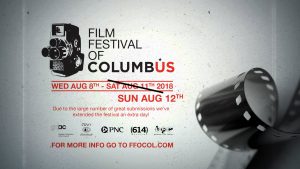 Here is the full line-up for this year’s festival:

In addition to screenings, festival organizers are planning a variety of events over the five days including workshops, receptions, and artist talks. Opening night reception is Wednesday, August 8. Festival VIP passes are available and include invitations to opening and closing ceremonies, private parties and special events, access to the VIP lounge, and reserved balcony seating for all screenings. Festival passes and single screening tickets are also available at www.gatewayfilmcenter.org.

Don’t miss this amazing week filled with film and fun!

Tess Abney
Tess Abney is a freelance writer who was born and raised in the Quad Cities. She spends most of her time attempting to successfully raise three boys. In her free time, writing is her passion. Whether it is sharing local events and businesses with readers or sharing her thoughts on life, she finds comfort in the way words can bring people together.
Tagged: ColumbusFilm Festival of ColumbusGateway Film Center