Home › Articles › Local › Do You Believe In Magic?

Do You Believe In Magic?

Learn new skills and have more fun at Intro to Magic!

Intro to Magic (Summer Camp Week 1) is happening this Saturday Jun 2 from 12-4 p.m. at Shadowbox Live’s Backstage Bistro (503 South Front Street Columbus). Must be 12 and older to participate.

The cost to participate in this one-of-a-kind Summer Camp for Adults is only $75, and you can register 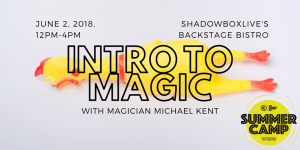 online at https://www.eventbrite.com/e/intro-to-magic-with-michael-kent-tickets-46377652808?aff=efbeventtix. Spots are limited, so register today!

A resident of Columbus, Ohio, Comedian and Magician Michael Kent gives the ancient art of magic a facelift with an irreverent and often satirical comedic spin. Michael spent his younger years learning magic to make friends and meet girls. After graduating from college, it became his job. Michael studied Communication, Linguistics and Theater at The Ohio State University and has studied at the world-famous Second City comedy theater in Chicago. He has performed for audiences all over the globe from The Magic Castle in Hollywood to US Troops serving overseas in 13 different countries. He’s been seen in hundreds of colleges all over the country in as many as 40 states in a single year, met lots of people, appeared on Penn and Teller’s Fool Us — even wrote a book.

Tess Abney
Tess Abney is a freelance writer who was born and raised in the Quad Cities. She spends most of her time attempting to successfully raise three boys. In her free time, writing is her passion. Whether it is sharing local events and businesses with readers or sharing her thoughts on life, she finds comfort in the way words can bring people together.
Tagged: ColumbusIntro To MagicMichael KentShadowbox Live