Criticism of LeBron Should Be Slam Dunked

This week LeBron announced that he’s donating millions of dollars to help send kids around his native Ohio to a special school, the I Promise School in Akron, he’s creating that will be free, will give them free uniforms, free breakfast lunch and snacks, free books, free transportation, and if they graduate, free tuition to University of Akron. He’ll also pay for their parents to get their GEDs, pay for childcare and pay for them to continue their own educations. 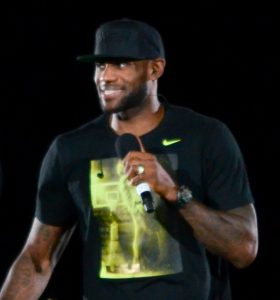 It’s an incredible gesture of largesse and return to his community that’s been unparalleled to this point among professional athletes.

I was always kind of ambivalent towards LeBron before. I thought he seemed like a good guy and he’s undeniably a fantastic player, but I was way too sick of the hype and thought the comparison of him with Michael Jordan was tiresome. I was also not a fan of him flopping for fouls at times and team jumping in search of championships.

But quite frankly, in the grand scheme of things, flopping for fouls and team jumping for championships are pretty venial sins compared to the fact that he’s donating an epic amount of money to help a lot of people with his new schools, not to mention that by most reports the guy seems to be a good husband and dedicated father. And this brings up an interesting point that seems to be getting lost so much in society nowadays… CONTEXT AND PERSPECTIVE.

There needs to be more understanding of context by people to recognize what are venial sins and what are mortal sins from a humanistic perspective.

And perspective — ALL of us have flaws. ALL of us have said and done stupid things. ALL of us, in the past, were the products of our upbringing and environment and may have said and done things that in retrospect were stupid, immature and that we now regret, because people have the capacity to learn and evolve, and there should be credit given for that, as opposed to a stark judgmental attitude towards people condemning them for every little thing they’ve done in their lives.

There are very few absolutes in this world, folks, there are very few black-and-white situations, and the shades of gray are colored by our backgrounds and our life’s travels and travails. Things can change from moment to moment, time to time in our lives, and we need to be more conscious of that.

Take LeBron. Here’s a guy who was already on magazine covers being called “the chosen one” in high school, who was pampered and praised obsequiously from an early age. He was not raised in the same way or in the same era as guys like Jordan, Magic and Bird, so to him, the prospect of joining forces with other stars for a championship seemed like a good idea rather than “selling out.” Many, myself included, who grew up in the Jordan era, knocked the guy for star chasing. But in the grand scheme of things, is that REALLY that big of a deal?

As opposed to what he’s doing now, which is basically giving free school and life help away to thousands of people and not only making their lives better, but making the world better through that ripple effect, those are very minor criticisms.

Think of that the next time you start to criticize someone — ask yourself if what you’re criticizing them for is really that big of a deal, and ask yourself to look at the person in general and see if for all the good they may add to the world, is it really worth it for you to tear them down or attempt to rip them up for something that’s ultimately subjective and superficial.

If you are offended by one word but not the other, when both mean the same, it is because of your cult-ural programming, society telling you from a small age that some words are bad, others good, when they’re all just words, neutral patterns of symbols likewise charged by repetition and appropriation to take on meaning according to the fluke circumstances of your birth. So, in other words, any negative connotations taken from a word are solely due to chance and subjectivity and have nothing to do with empirical value or worth.

Unlike a person’s actions, which are largely solely the responsibility of themselves and are a far more accurate determination of their character.

LeBron is donating millions of dollars to give poor children free schooling, clothes and food and their parents free education, childcare and opportunities to better their lives, including free college for all involved.

So you’ll forgive me if I don’t give a shit that he dropped an f bomb while giving a pep talk to a bunch of 13-year-olds on his son’s basketball team.

Or a poop either.

Sean Leary
Sean Leary is an author, director, artist, musician, producer and entrepreneur who has been writing professionally since debuting at age 11 in the pages of the Comics Buyers Guide. An honors graduate of the University of Southern California masters program, he has written over 50 books including the best-sellers The Arimathean, Every Number is Lucky to Someone and We Are All Characters.
SeanLeary.com
Tagged: basketballCleveland CavaliersLarry Birdlebron jamesLos Angeles LakersMagic JohnsonMichael JordanNBAUniversity of Akron