Home › Columns › Sean Leary › In A World Of Perfect Pitch, Would A Hung Be Hot?

In A World Of Perfect Pitch, Would A Hung Be Hot?

When it comes to singing, most of us are best served in our quest at vocal immortality by forgiving shower walls.

Some bar band and karaoke heroes are a rung up, but we also have the advantage of typically serenading the inebriated.

Even in the case of some “professional vocalists” the studio trickery of Pro Tools is what makes them pristine and listenable on record.

However, a day may not be too far off when every crooner is perfect. A day when singers are bred, not discovered. 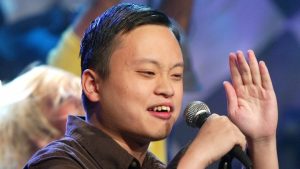 No, this isn’t about “American  Idol.”  However, it will likely spawn a reality TV show someday.

Recently, U.S. scientists discovered that one gene, or at most a handful of genes, may give people “perfect pitch” — the ability to name the note of any sound. A three-year battery of tests led them down the genetic path, and now they’re going to expand upon the hypothesis by gene mapping to look for which of the little buggers grants people that skill.

So let’s jump ahead a bit.  Say they find that gene. Also, say we get to a point where scientists are able to manipulate a baby’s genetics before it’s born, or even conceived.

What’s to stop parents from custom ordering a baby with perfect pitch?

Let’s jump it ahead a little more.

What if they find that other musical talents are likewise genetic? After all, don’t scientists have enough evidence given the careers of Nelson, Willow Smith and Paris Jackson?

Can we all agree on those?

Once scientists map the genes for talents, such as singing, it’ll be a hop to the left and a step to the right to a day when those talents will be able to be imprinted on a human being. And you know that some futuristic bionic yuppie is going to want little Murgadroid to be blessed with gifts to rival a renaissance man.

Ergo, we’ll see babies made to order, genetically engineered to be mini-Christina Aguileras.

(Which will be really, really, small because Christina Aguilera is not a tall girl.)

Hmmm.  That could lead to another interesting trend. Celebrity look-alikes. But I digress.

Anyway. Now, imagine we get to the point where genetic engineering is so cheap and common that everyone can be imprinted to be a perfect singer. And so almost everyone is a fantastic vocalist.

But, before you know it, those smooth, unflappable notes will become commonplace. Mundane. Boring.  So then, in search of variety, people will go looking for singers who are flawed, imperfect. Warblers whose tin throats’ distinctive din is a welcome, attractive change.

And on that day, as the karaoke bars are filled with genetically-engineered, note-perfect renditions of old Mariah Carey and Whitney Houston songs, televisions across the land will crackle with another sound.

Sean Leary is an author, director, artist, musician, producer and entrepreneur who has been writing professionally since debuting at age 11 in the pages of the Comics Buyers Guide. An honors graduate of the University of Southern California masters program, he has written over 50 books including the best-sellers The Arimathean, Every Number is Lucky to Someone and We Are All Characters.
Tagged: American Idolbar bandsbar singersJulian Lennonkaraokelocal musicNelsonParis Jacksonperfect pitchRufus WainwrightSean LearysingersWilliam HungWillow SmithWilson Phillips