Home › Posts Tagged "Not Dead Yet"

Posts Tagged With ‘ Not Dead Yet ’

Phil Collins’ Not Dead Yet Tour Making Stop in Columbus 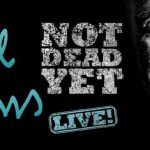 If you had any trepidations as to how Phil Collins is doing, is Not Dead Yet. And he’s coming to Columbus! Phil Collins brings his Not Dead Yet Tour to Nationwide Arena (200 W Nationwide Blvd Columbus) this Friday Oct 19 at 7 p.m. The Not Dead Yet Tour began back in 2016 around the time Collins’ autobiography was released by the same name. The singer pushed through a series of European shows, but ultimately shelved the tour after tripping in his London hotel room. Collins cited ongoing pain and health concerns after being hospitalized for the fall, eventually postponing US tour dates. This... Read More