Bob Marley is heading to Columbus! No, not that Bob Marley. The funny one! 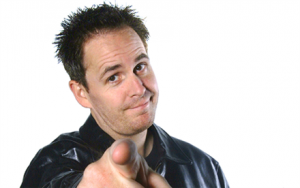 Originally from Maine, Bob Marley began performing stand-up comedy in his hometown of Portland. He moved to Boston early in his career, gaining experience in a city known for spawning comedy all-stars. He now has a weekly radio call in segment with several radio stations around the country called “The World According to Bob.” Winner of this year’s XM/Sirius ‘Super Bowl of Comedy’, he continually makes new fans around the country.

Making his first television appearance on Comedy Central, he is now one of the few comics to do the complete late-night circuit including The Late Show with David Letterman, The Tonight Show with Jay Leno, Late Night with Conan O’Brien, and The Late Late Show with Craig Ferguson and Craig Kilborn. He has also appeared on 100 Television shows including VH-1’s “Super Secret Movie Rules”, Comedy Central’s “Premium Blend,” “USO Comedy Tour” and most recently “Comedy Central Presents Bob Marley,” Bob’s half-hour special.

Many movie fans will recognize him from his appearance in the cult favorite movie, Boondock Saints and the highly anticipated sequel released in fall of 2009, All Saints Day. Bob co-stars with Willem Dafoe, Sean Patrick Flanery and Norman Reedus (as the McManus brothers), Billy Connolly (ll Duce), new female lead Julie Benz (Rita on Showtime’s ‘Dexter’), brat packer Judd Nelson and film legend Peter Fonda. His comedic take on “Detective Greenly” inspires fans to constantly approach him and quote lines from the film. Bob Marley brought back the always funny and incredibly wrong Detective Greenly, in a much larger role in the second film. Audiences are in for a treat whether they catch this Mainer’s act on stage or on screen.

Tess Abney
Tess Abney is a freelance writer who was born and raised in the Quad Cities. She spends most of her time attempting to successfully raise three boys. In her free time, writing is her passion. Whether it is sharing local events and businesses with readers or sharing her thoughts on life, she finds comfort in the way words can bring people together.
Tagged: Bob MarleyColumbusComedyComedy clubEventsFunny BoneThings To Do