You may know him as the crazy no-holds-barred guy on MTV and the Big Screen, but now is your chance to witness his hilarity live, in person. 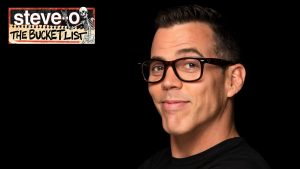 Steve-O (a.k.a. Stephen Glover) is a household name and it all started when he began producing homemade videos of dangerous stunts mixed with comical behavior. Steve-O graduated from Ringling Bros. and Barnum & Bailey Clown College in 1997 and had a career as a circus clown before achieving fame on Jackass and Wildboyz. Since then, he has become a New York Times bestselling author, standup comedian, and actor. His first hour-long comedy special recently premiered on Showtime and performed in the top one percent of all Showtime comedy specials.

Make sure to read through all of the disclaimers, because this will be one exciting show!

Tess Abney
Tess Abney is a freelance writer who was born and raised in the Quad Cities. She spends most of her time attempting to successfully raise three boys. In her free time, writing is her passion. Whether it is sharing local events and businesses with readers or sharing her thoughts on life, she finds comfort in the way words can bring people together.
Tagged: ColumbusColumbus Funny BoneComedy clubEventsJackassSteve-OThings To Dowildboyz