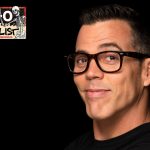 You may know him as the crazy no-holds-barred guy on MTV and the Big Screen, but now is your chance to witness his hilarity live, in person. Steve-O is taking the stage at the Columbus Funny Bone Comedy Club (160 Easton Town Ctr. Columbus) this Friday Oct 19 at 7:45 and 10:30 p.m. and Saturday Oct 20 at 7 and 10 p.m. Steve-O (a.k.a. Stephen Glover) is a household name and it all started when he began producing homemade videos of dangerous stunts mixed with comical behavior. Steve-O graduated from Ringling Bros. and Barnum & Bailey Clown College in 1997 and had a career as a circus clown before... Read More