Aaron Lewis, founder of alternative metal band Staind, is on tour and heading straight for Columbus!

Two night, back to back, you can see Aaron Lewis with opening artist Travis Marvin live at The Bluestone (583 East Broad Street Columbus). Performances will be on Thursday Aug 23 and Friday Aug 24 with doors opening at 7 p.m. each night. 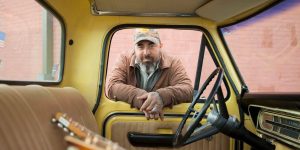 Lewis has been performing solo acoustic shows since he was 17 and still does today. He has written and performed many songs that have never been officially released such as “Angel”, “Something Like Me”, “Bonghits for Breakfast” and “Sleeping at the Wheel”.

In July 2010, Lewis finished recording a country music EP entitled Town Line that was released March 1, 2011 on Stroudavarious Records. It features seven tracks including three versions of the first single “Country Boy” featuring George Jones, Charlie Daniels, and Chris Young, as well as the songs “Massachusetts”, “Vicious Circles”, “The Story Never Ends”, and a re-recording of “Tangled Up in You” originally from The Illusion of Progress. Lewis said in a July 2011 interview that he was introduced to country music as a child by his grandfather, but his interest was recently rekindled when he toured with fellow rock turned occasional country singer Kid Rock.

Lewis released his first full solo album, The Road, in November 2012. Its debut single, “Endless Summer”, has also made the country charts. Lewis wrote every song on the 10-track collection, except for “Granddaddy’s Gun” which was penned by Dallas Davidson, Rhett Akins and Bobby Pinson, marking the first time Lewis has recorded outside material for an album. In an interview with Broadway’s Electric Barnyard, Lewis said he recorded “Granddaddy’s Gun” as both a compliment to a friend, and because he was pressed for time.

Lewis wrote songs for his second solo album whilst touring in support of The Road, often performing the unreleased material in his live sets. The album, dubbed Sinner, was mostly recorded in a single 18 hour session, with many tracks done in one take. Aaron’s daughter Zoe also provides guest vocals on one song. It was released on September 16, 2016, with the lead single, “That Ain’t Country”, released on 17 June. Country artist Willie Nelson is featured on the album’s title track as well.

Tickets to this show are $35 in advance and $40 at the door. They can be purchased online at http://liveatthebluestone.com/blog/event/aaron-lewis-2/.

Tess Abney
Tess Abney is a freelance writer who was born and raised in the Quad Cities. She spends most of her time attempting to successfully raise three boys. In her free time, writing is her passion. Whether it is sharing local events and businesses with readers or sharing her thoughts on life, she finds comfort in the way words can bring people together.
Tagged: Aaron LewisColumbusEventsStaindThe BluestoneThings To DoTravis Marvin