Hey Columbus, are you ready for The Guitar Event of the Year?! 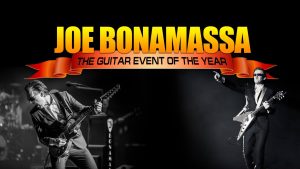 Bonamassa has more #1 Billboard Blues Albums than any other artist to date.

Joe Bonamassa is the guitarist’s guitarist. A master of the blues, Bonamassa easily ranks alongside the more well-known Clapton or Jeff Beck. Such was his prodigious talent that he supported B.B. King at the tender of age of twelve in 1989 and was christened by King as “one of a kind.” Since then, he’s played with anyone who is anyone and released a formidable catalogue of studio albums.

Bonamassa is one of those performers who seems to live on the road this year is no different. An opportunity to witness a master at the very top of his game is one not to be missed!

Tess Abney
Tess Abney is a freelance writer who was born and raised in the Quad Cities. She spends most of her time attempting to successfully raise three boys. In her free time, writing is her passion. Whether it is sharing local events and businesses with readers or sharing her thoughts on life, she finds comfort in the way words can bring people together.
Tagged: ColumbusEventsguitarJoe BonamassaPalace TheatreThings To Do