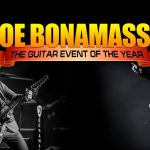 Hey Columbus, are you ready for The Guitar Event of the Year?! Grammy-Nominated Blues Rock Titan, Joe Bonamassa, will be live at the Palace Theatre (34 W Broad St. Columbus) this Wednesday Nov 7 at 8 p.m. Bonamassa has more #1 Billboard Blues Albums than any other artist to date. Joe Bonamassa is the guitarist’s guitarist. A master of the blues, Bonamassa easily ranks alongside the more well-known Clapton or Jeff Beck. Such was his prodigious talent that he supported B.B. King at the tender of age of twelve in 1989 and was christened by King as “one of a kind.” Since then, he’s... Read More