While his fame began with lip-syncing on musical.ly, it turns out social media sensation Jacob Sartorius can really sing! And now you can see him live! 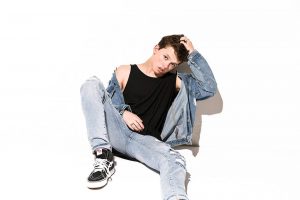 After rising to fame via social media, Sartorius signed with T3 Music Group and released his debut single “Sweatshirt” on May 3, 2016. The song peaked at No. 90 on the US Billboard Hot 100, No. 81 on the Canadian Hot 100. Sartorius performed the song for the first time in Baltimore on May 7 during the Magcon tour, a tour where fans can meet and interact with Internet personalities and see them perform. Around that time, Business Insider predicted Sartorius “could be the next Justin Bieber”.

After the tour, Sartorius released two more singles, “Hit or Miss” and “All My Friends”. With “Hit or Miss” debuting at No. 72 in the United States, it is his highest charting single to date. In 2016, Sartorius undertook the All My Friends Tour, a solo mini-tour where he performed in six cities. Three months later, Sartorius announced The Last Text World Tour where he would perform in seven countries in 2017 in support of his debut extended play The Last Text. Sartorius’ E.P. was released on January 20, 2017. Mid-2017, Sartorius signed with RCA Records and on October 6, released his major label debut, Left Me Hangin’.

For more information on Jacob Sartorius, including upcoming tour dates, visit his website at https://jacobsartorius.com/.

Ticket prices are $25 in advance and $27 on the day of the show. You can purchase your tickets today at https://www.ticketmaster.com/jacob-sartorius-newport-music-hall-columbus-oh/venueartist/41026/2267962.

Tess Abney
Tess Abney is a freelance writer who was born and raised in the Quad Cities. She spends most of her time attempting to successfully raise three boys. In her free time, writing is her passion. Whether it is sharing local events and businesses with readers or sharing her thoughts on life, she finds comfort in the way words can bring people together.
Tagged: ColumbusEventsJacob Sartoriusmusical.lyNewport Music HallThings To Do