Anything Goes With Randy Houser!

‘Anything Goes’ this week at Randy Houser’s live performance at the Bluestone!

Thursday May 10 country singer and songwriter Randy Houser will be performing at The Bluestone (583 East Broad Street Columbus) at 7 p.m. with opening artist Dee White.

Tickets are $30 in advance and $35 on the day of the show, and can be purchased online at https://www.eventbrite.com/e/randy-houser-at-the-bluestone-tickets-43199688431 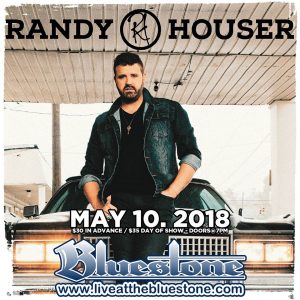 Country crooner Randy Houser may have started off in the music industry as a songwriter, but now the Mississippi-born musician focuses more on belting out the tunes at arena concerts nationwide. Houser has unveiled three studio efforts to date, beginning with his 2008 debut, “Anything Goes.” The title track, which the musician performed on the “Late Show with David Letterman” ahead of the album’s release, garnered attention instantly and was quickly followed up by his second popular single, “Boots On.”

His 2010 sophomore set entitled “They Call Me Cadillac” contained two charting singles, “Whistlin’ Dixie” and “A Man Like Me,” while his most recent album, “How Country Feels,” has already spawned three. The early 2013 release peaked at No. 3 on Billboard’s Top Country Albums and Independent Albums charts and features co-writing credits by other country ticket sellers like Lee Brice and Zac Brown.

Houser’s own writing credits can be found on Trace Atkin’s “Honky Tonk Badonkadonk,” Jesse James’ “My Cowboy” and “Back That Thing Up” by tour mate Justin Moore.

Tess Abney
Tess Abney is a freelance writer who was born and raised in the Quad Cities. She spends most of her time attempting to successfully raise three boys. In her free time, writing is her passion. Whether it is sharing local events and businesses with readers or sharing her thoughts on life, she finds comfort in the way words can bring people together.
Tagged: ColumbusRandy HouserThe Bluestone