Are you ready for the most hilarious comedy variety show in Columbus?!

Strange Loop Variety Show is an exciting night of Stand Up, Songs, and Comedy Shorts. This brand-new variety show will feature some amazing regional Comedians, Musicians, and Comedic Short Films. A 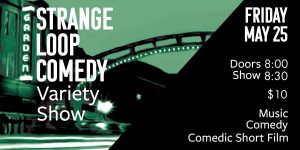 clap off at the end will help vote for the best comedy short.

Your headlining stand-up comedian for this show is none other than Ohio’s own Geoff Tate! Your musical act is Hank M. Zaborniak.

Tickets are only $10 and can be purchased online at https://www.eventbrite.com/e/strange-loop-comedy-variety-show-tickets-43811246618.

Come have some laughs at the Strange Loop Comedy Variety Show! There will be something entertaining for everyone!

Tess Abney
Tess Abney is a freelance writer who was born and raised in the Quad Cities. She spends most of her time attempting to successfully raise three boys. In her free time, writing is her passion. Whether it is sharing local events and businesses with readers or sharing her thoughts on life, she finds comfort in the way words can bring people together.
Tagged: ColumbusGarden TheatreShort NorthStrange Loop ComedyVariety Show