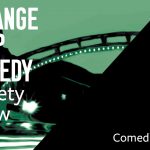 Are you ready for the most hilarious comedy variety show in Columbus?! This Friday May 25 from 8-10 p.m. Strange Loop Comedy will be presenting their Strange Loop Comedy Variety Show at the Garden Theatre in the Short North (1187 North High Street Columbus). Strange Loop Variety Show is an exciting night of Stand Up, Songs, and Comedy Shorts. This brand-new variety show will feature some amazing regional Comedians, Musicians, and Comedic Short Films. A clap off at the end will help vote for the best comedy short. Your headlining stand-up comedian for this show is none other than Ohio’s own... Read More