Posts Tagged With ‘ Puss in Boots ’ 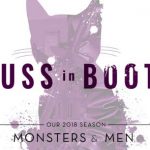 The Actors’ Theatre of Columbus has a new production to add to their Monsters & Men 2018 Season. Head to Schiller Park (1000 City Park Ave Columbus) between Jul 19 and Aug 5 to see the live performance of Puss in Boots. The FREE performances (donations accepted at intermission) will run Thursdays – Sundays at 8 p.m. Puss in Boots, or the Master Cat, is one of the great fairy tales in Western literature. First put to paper by Giovanni Francesco Straparola in the 1550s, Puss in Boots is the story of a talking cat who serves his poor owner by his wits, making his master wealthy, finding him... Read More