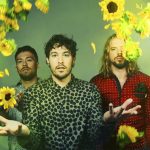 Have no fear Columbus, Red Sun Rising will be giving you the show you deserve! Red Sun Rising was originally scheduled to perform Dec 1 at A&R Music Bar, but due to a leak the show was rescheduled. And it’s almost here! Ohio-natives, Red Sun Rising, will take the stage Saturday Jan 19 at Newport Music Hall (1722 N High St. Columbus). Doors open at 7 p.m. Red Sun Rising formed in 2006 when Mike Protich and Ryan Williams, who used to be high school classmates, struck up a conversation about music at a gas station. By 2007, Red Sun Rising’s first line-up was formed, and they were playing... Read More